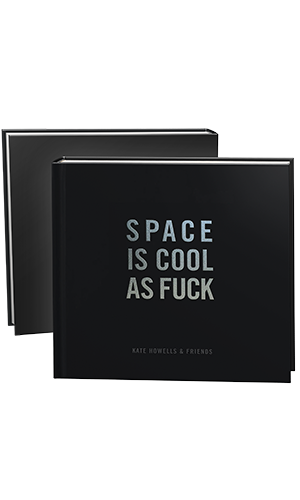 Space is Cool as Fuck

Artists and scientists collide on the magical, wonderful infinity and possibility of space.

Space is Cool as Fuck - a unique gift to delight and offend.

Taking all the best bits of science and fusing it all together, Space is Cool as Fuck will be finding a permanent home on living room tables around the world. With a brief history of the whole universe, you’ll be left scratching your head and gazing up in absolute wonder.

Everything you thought you could never understand about the universe is explained in plain-old filthy English. Giving you a little taste of the glorious reality you inhabit by providing an introduction to some of the incredible stuff out there.

Over 50 chapters on subjects including:

Space is Cool as Fuck features more than 100 wild artworks, photographs and illustrations from 40 international young artists curated by brilliant designer Cynthia Larenas. From hand-picked unknowns like Kate Kurucz and Adrian du P.B. through up-and-comers like Aida Azin, Waiton Fong, and Chrissie Abbott, to the more established Joel Vans, Kareena Zerefos, James Reka, Regan Tanamui (Ha Ha) and Marina Zumi, each artist brings their own aesthetic to the majesty and wonder of space giving the book its exquisitely eclectic style.

A little something extra

Space is Cool as Fuck features an in-depth and illuminating interview with everyone’s favourite TV scientist Bill Nye the Science Guy, Head of the Planetary Society, who believes that, no, we are not fucked and this planet and our people have a future.

Co-Author Kate Howells is both a space fanatic and the Global Community Outreach Manager of the Planetary Society, an organisation empowering the world’s citizens to advance space science and exploration.